The night before our Caterham Driving Experience I made sure I had everything ready to go as we had an early start. My check list – driving license, long sleeve top, narrow shoes and a water proof jacket – was complete.

The next day we made the journey up to Silverstone for what promised to be an amazing day. Our bleary eyes fuelled by the adrenaline and excitement of the events to come. Silverstone is easy to find with access via the motorway and signs coming relativity early as a guide to the venue. The famous race track awaited the next Jenson Button or Lewis Hamilton!

Upon arrival we entered the complex to find our cars being prepared next to the large Caterham Support Truck, fresh tyres being laid out ready to be fitted. We were greeted by the Caterham crew where we were registered and introduced to the other ‘racing drivers’. Registration couldn’t have been simpler, just having to fill a disclaimer out and show your license. We were given wrist bands indicating our teams for the day.

When everyone had arrived we received our briefing about the cars, crew and the day to come. We had a special day planned with 2 activities incorporated into a one day experience. In the morning would be the ‘Caterham Slalom Experience’ (usually a half day experience) and the afternoon would be the ‘Caterham Drifting Experience’ (usually a full day). 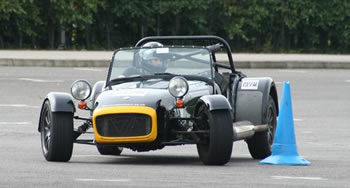 With the slalom course ready in front of us we were shown a demonstration lap and given instructions of how to achieve the perfect run. The first course was a set of cones designed for slalom with a high speed corner into a donut section. Then came the practice, everyone eager to test the cars out on the course. Two laps each provided the perfect introduction to what the Caterham could achieve, everyone testing the limits and left wanting more. We were soon back in the cars for our timed runs, trying to beat the clock as well as control these quick and nimble cars. There were plenty of spins as the cars twitched as we tried to eek out a few extra seconds. The top times were read out before the course was changed for the next session.

The next course had a wider slalom that lead into a high speed corner followed by the dreaded donut from the first session. This course allowed for a quicker entry into the corner for a chance of drifting (..out of control!!) and then into the donut. As before we received demonstration and practice laps, followed by the timed laps. After the second session we received the cumulative times for everyone.

Lunch allowed us to reflect on the fun and excitement of the morning session, with talk turning to the best spin outs and donuts, everyone anticipating the excitement that awaited us in the drifting session. 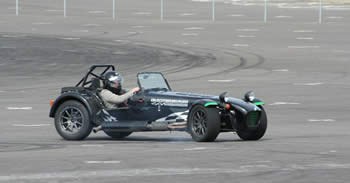 The course was laid out over lunch, with everyone’s conversation turning to the confusing, and seemingly random arrangement of cones. Everyone was relishing the challenge to come with more donuts and lots of corners to encourage drifting. Demonstration laps started the session off as the driver made their way round with ease. The second demonstration lap showed what can really be achieved as the driver turned on the entertainment with a drift filled, tyre screeching lap. It was our turn; we had the choice between speed or drift as our laps were timed to continue the battle from the morning session. Some went for times and others went for drift. Whichever was chosen everyone had a great time as lap after lap were completed with thrills and spills aplenty.

For the final time the fastest drifting times were added to our fastest morning slalom times. Places were announced with the differences in times from last to first place, everyone covered by just over 3 seconds. We all received a goody pack for the day as well as first to third receiving prizes. People said good bye as an immensely enjoyable and exhilarating day came to an end. The drive home was seriously disappointing as you wished you could have driven the Caterham 7 home instead!

This was a Driving Experience review by Matthew