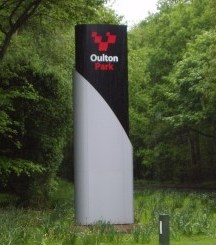 This experience day was a birthday present bought for me by my Parents. As an avid petrol head I forever bore people to death with my love of all things fast and noisy – yet up to this point I had never driven anything on a track. I had owned a few quick(ish) cars, and driven a few properly quick cars, but had zero track experience. I’m guessing my parents were stuck for something to buy me and so opted for something ideal.

The pack I was given gave me a race day card thing to wear round my neck, a rough description of the event I had been bought, and a few other random bits of paper. I opted to take my experience day at Oulton Park as it is fairly close to me, and it’s a track I have been to watch BTCC racing at. I booked my day in May – I wanted a fair chance of decent weather, but couldn’t wait until the height of summer as I was to keen to rip up some tarmac.

After months of waiting the day finally came round and I was as excited as I remember being as a kid at Xmas. My session started at 10am so we were up early…and luckily it was a dry sunny day. My parents and a few mates were coming along to watch so we bundled into a couple of cars and headed to the circuit.

As we arrived we were greeted and I was directed to a room where we were given a safety briefing. We were given descriptions of the various flags and rules of the circuit, looking round I could see people from all walks of life. A few people looked like they had done this thing a good few times before, there were a few petrol-addicted newbies like me, a couple of people that looked like they really weren’t fans of motorsport or speed in general, and a worrying group of lads on a Stag Do.

Once we had all been given the safety chat were split into two groups to minimise the number of cars on the circuit at any give time. I was in the first group so was directed to the track to do some warm up laps in a race prepped Audi TT.

I got into the car and the instructor introduced himself to me. He showed me how to buckle myself into the 3 point harness, and how to adjust the race seats. He explained that he was going to let me do the first lap on my own, assess my strengths and weaknesses, and then help me improve over a few laps. Through the laps he noted and scored my driving skills so I could measure how much I had improved through the day.

The track had been marked with cones on the corners to indicate breaking points, apex, and acceleration points. This made learning the racing line fairly simple, and is still a cornering technique I use today on the road. After 5 laps we swapped over and he gave me a demonstration of how it was done. I was amazed by how much faster he could push the car through the corners. At the end of the warm up he told me I had scored 76% and gave me my score sheet. Not bad for a first attempt.

We then moved on to drive the single seaters. I preferred this section as I felt almost self-conscious with an instructor sat beside me yelling instructions through my helmet. The single seaters were very simple to operate. They had a digital speedo, rev counter and lap timer on the steering wheel, an accelerator, brake, clutch and 4 speed box. We were told not to over rev the engine, and that they were speed limited to 100mph. We were also warned that the clutches were unprogressive and tricky to master.

I stalled a couple of times before I got going – the clutch was like a switch – in, or out, with no in-between. But once I was going I was flying round the track. The initial 100mph limit which sounded quite good was becoming annoying on the straights – the acceleration was very fast and I was bouncing off the limiter. I wish they had raised the limit to 130mph…or removed it all together.

The single seaters were amazing in the corners – they remained so balanced, you could fly through the bends without any worry of loosing grip. The 10 laps of the course went by so quickly – I was gutted when my turn had finished and I was signaled into the pits. Once all the cars were off the track it was the turn of the second group of people, including the Stag-do lads I mentioned earlier. I waited in the pits to watch the second group go round and I’m glad I did. One lad from the stag group decided to undertake his friend on the pit straight. There was no room for him to get past so he decided to overtake on the grass. This caused him to loose traction mid-manouver pushing him into his friend – and then pushing the two of them into the pit wall at close to 100mph!

Bits of car flew everywhere in a Formula-1-like highspeed crash. The two guys made it out ok but the cars were destroyed – a testament to the safety of the cars, and the stupidity of some of the drivers. They were taken away to a meeting room and yelled at for a while – I’m guessing insurance covered the losses but it did turn a fun day into something more serious. It highlighted the dangerous nature of all motor-sports and the need for the initial saftey-briefing. It also explained the 100mph limit.

Overall this Oulton Park driving experience was one of the best presents I have ever been bought. It could have only been made better by extending the number of laps, and increasing the speed limiter!

This was a Driving Experience review by Steve