How to Get there

Airport: Southampton airport is the closest airport to Thruxton at around 45 minutes away

Thruxton Circuit is yet another airfield based track that is the fastest race track in the UK. Unlike many other circuits, Thruxton is fairly unique in the UK in so far as it has very long fast corners meaning drivers and cars can reach and keep very high speeds around the circuit. 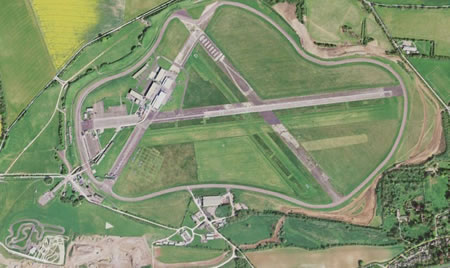 Thruxton Circuit is the fastest circuit in the UK and measures 2.4 miles in length and is host to both the British Touring Cars (BTCC) and British Superbikes (BSB).

RAF Thruxton was created in 1941 as an airfield for WW2 and was used to play a major part in the D-Day landings. In 1946 the airbase was surplus to requirements and in 1950 was when it started to be used for motorsport. Motorbikes raced the track which was both runways and the perimeter roads. In 1952 cars also started to race at the circuit but this was for just 1 year as the circuit tarmac was breaking up, however the bikes continued racing there until 1965.
In 1968 racing returned to Thruxton Circuit after a new track was built, however the original runways were not used and the track was created around the perimeter of the airfield.

To show the speed of the circuit Damon Hill drove the Williams F1 car around Thruxton Circuit in 1993 and set a lap time of 57.6 seconds for the 2.4 miles and an average speed of 147.25 mph!